What can be more adventurous than taking a hot air balloon ride? I can name a few adventurous activities, but there is something fascinating and wonderful about floating high in the sky letting the gentle winds guide you over land and sea. I must admit that it is a bit unnerving to know that Mother Nature ultimately holds the fate of your destination other than being able to control your rise and fall. I guess that’s part of the fascination. While I’ve never taken a hot air balloon ride, I would imagine the experience would make you feel alive.

When I got the message from my wife about the first Hot Air Balloon Spooktacular in Spring Hill, Tennessee, I immediately saved the date. I’ve shot hot air balloons when I spotted them crossing the sky, but I’ve never shot a large group of balloons together in the same place. I’ve always wanted to do that, especially when they would light up their burners all at once. That’s the picture I wanted. This event took place at the Tennessee Children’s Home to which much of the proceeds were given. Here’s an excerpt from their website.

Tennessee Children’s Home began in 1909 as the Tennessee Orphan Home in Columbia, Tennessee. It was created to meet the needs of the three Scotten children, who had been tragically orphaned. In 1935, the Home purchased the campus of the Branham and Hughes Military Academy and moved to Spring Hill, Tennessee. As with many of the old orphanages, the Home was designed as an institutional facility with central dining, central laundry, dormitory living, and a small farming operation. The approach to child care was to provide the basic physical needs of children and to offer Christian instruction. The number of children served grew dramatically throughout the decades, and in late 1982, the name was changed to Tennessee Children’s Home. The institutional approach was replaced with family oriented group homes. Dormitories were remodeled into single-family homes, with a maximum of eight children in each home. Central dining was replaced with family meals in the group homes. The family groups now individually carry on most activities, such as home devotionals, church attendance, housekeeping, laundry, cooking and cleanup. In 1988, we expanded again by merging with West Tennessee Children’s Home, followed in 2000 and 2001 by mergers with Happy Hills Youth Ranch near Ashland City, and East Tennessee Christian Services in Knoxville. Since 1909, we have cared for over 20,000 children. Our professional services, coupled with loving staff and a Christian environment, make Tennessee Children’s Home one of the finest programs in the state. We are anticipating that, with your help and generous support, the 21stcentury will continue to be a period of stability, growth and progress….

I quickly realized that I was not as prepared for this event as I wanted to be. I currently don’t have a wide angle lens for my new camera. This was going to restrict my creativity. After switching to my new mirrorless camera back in August, I did not obtain a wide angle lens. The widest lens in my arsenal is a 17mm. I haven’t acquired the adapter that would allow me to use my wide angle lens from my old system. For those who are not familiar with my digital work, I use the Four Thirds format and now Micro Four Thirds. Thus, for reference, my 17mm lens will have the same angle of view as a 34mm lens on a 35mm format camera. I’ve been researching a wide angle lens and believe I’ve found one that will work great and not break the bank. It’s actually considered to be ultra-wide. I will have to save my pennies, but what was I going to do for the event? Enter Lensrental.com to the rescue. I procrastinated literally to the last minute. The event was on Saturday and I called Lensrental on Thursday with less than 10 minutes left before they stopped shipping that day. They had the exact lens I wanted to purchase and they could deliver it overnight for no charge from their out of town store to  their local warehouse which is a short drive down the road. I placed my order and picked up my lens after work on Friday. Thanks to the no hassle and fast service of Lensrental.com, I had my wide angle lens, and I had an opportunity to test drive the actual lens I hope to add to my arsenal in the near future. I highly recommend the services of Lensrental.com!

So what’s the lens spec? It is a 9-18mm f4-5.6. It’s a slow lens, but I don’t need it to be fast. It’s use will be for landscape which I will stop down for maximum depth of field. The only other lens I used that day was my 45mm f1.8. I used the 45 to capture candid moments of the crowd. I wanted to give a sense of the moment by including the people doing their thing.

After mingling with the crowds, I began scouting for compositions for capturing the balloons. All the deflated and partially inflated balloons were all lined up in a large field. I started to engage some of the balloon owners and captured a few shots of them getting their balloons ready. I learned that the party balloons flying in the sky as seen in this next picture was a bellwether. Hot air balloons are at the mercy of the winds. These balloons let the pilots know how the wind was behaving. The balloon crews did not inflate their balloons until the winds were calm. Along with reading the party balloons, the pilots also paid close attention to the weather predictions for the evening.

What had been a cloudy day, turned out to end quite nicely. The parting clouds revealed a blue sky with the potential of presenting a nice sunset to end the day. Even though all the balloons were not ready, I still wanted to get a sunset shot with the balloons before it was too late. I made my way back to my car to get my tripod. Along the way, I grabbed a few more shots of the crowd. 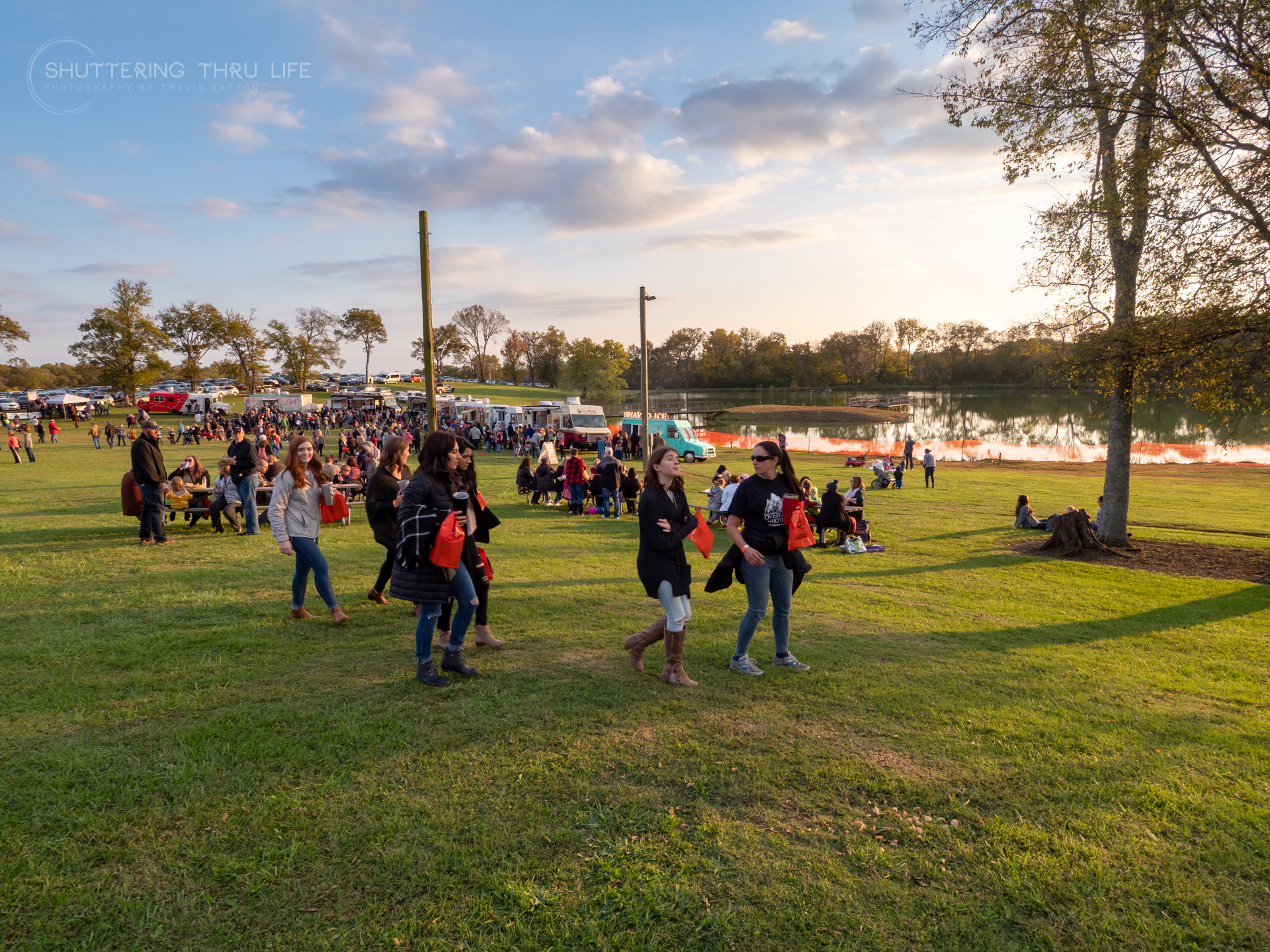 After shooting the above picture, he asked me to give him a high five, LoL! With the sun descending rapidly, I had to move quickly to catch the sun at the horizon. I had pictured the shot I wanted, so I knew exactly where I needed to be. I backed up far enough to put the sun right at the top of the trees. After I got my sunset shot, I took a few more photos before setting up for the finally.

It was finally time to light the burners! This is where the 9-18mm lens really shined. I trekked the open field to line up my composition so I could capture all of the balloons in a line. I had just enough room to frame all the balloons without stepping into part of the field that was overgrown. The show was really cool! While music from Michael Jackson’s Thriller to the theme music from Harry Potter played in the background, the balloons lit up in unison and sometimes to the cadence of the song playing. Hearing the roar of the burners was just as impressive as the light from the flames of the burners. The darker it got, the more impressive the scene became. I shot some video while taking these stills. I’ll share those at the end.

I took a minute to disengage from the camera. I sat in the field for a while just taking in the show. You could tell the balloons were a big hit because you could hear the loud applause after each song. Eventually I packed up my gear and headed for the car. As most people were beginning to leave, the balloons were still doing their thing. Before I got to my car, I captured one more shot. I decided on a black and white treatment for this one. I really like the mood of this shot with the hint of people in the foreground.

Here are the videos I promised. I’m much better with stills. I have a lot to learn when it comes to shooting videos, but I believe these clips give you an idea of the setting. The second video starts off out of focus, but after a little hunting around things come into view.

While doing some research on hot air balloons I came across the “Balloonist’s Prayer.”

I hope this marks the start of a Spring Hill annual event. If so, I believe I’ve found a new Halloween tradition! I can only see this event getting bigger each year. There is a little something for all ages. Food, music, shopping, games, and balloon rides to name a few. I was solo this time, but after seeing my photos and hearing about my experience, my wife said she would be there next year. Who knows, I might take a tethered ride. Thank you Middle Tennessee Hot Air Adventures and The Children’s Home along with the city of Spring Hill, Tennessee for hosting an excellent family event and thank you for taking the time to read my post. If you like what you see or like photography in general, subscribe to my blog or like and follow me on Facebook at Shuttering Thru Life.