Oops! It appears that you have disabled your Javascript. In order for you to see this page as it is meant to appear, we ask that you please re-enable your Javascript!
Skip to content

American as Apple Pie – The Spirit of America

This is my last installment of my American as Apple Pie Series. If you have not read my previous post in this series, just click the links below. My goal for this project was to simply capture the moment, not to editorialize, but to document each event as they unfolded. It all started on President Donald Trump’s Inauguration Day. On that day, when our 45th president officially took office, I captured the Silent Inauguration protest and the protest events at the Tennessee State Capitol.  The day after, I marched in the Women’s March through downtown Nashville. On the flip side, I documented President Donald Trump’s visit to Nashville and I also documented a Trump Rally on Legislative Plaza. This current post is about the latter. As I mentioned earlier, my goal was objective reporting. However, at the end of this post, I will give you my overall opinion from my personal experiences while documenting these events.

American as Apple Pie – Protest at the Capitol

Let’s talk photography for a second. I used my trusty Olympus OM1 SLR. I mainly shot through my 50mm f1.8 lens, but I pulled out the 28mm f3.5 for some wide angles. I am not oppose to shooting color on the street, but I felt black and white film would add to the documentary feel for these images. My favorite black and white film for the streets is Kodak TRI-X 400. All of these shots in this post and all of the other posts in this series were developed and scanned by The FINDlab in Orem, Utah. Ok, before we start, I have to put my disclaimer here. Just like the Women’s March, there are some signs with inappropriate language.

It was a perfect day to have a “Spirit of America Rally” in Nashville in honor of our newly elected president. The skies were clear and the temperature warmed up nicely for a Winter Saturday in March. The atmosphere was festive. Young and old alike were showing their support for Donald Trump. 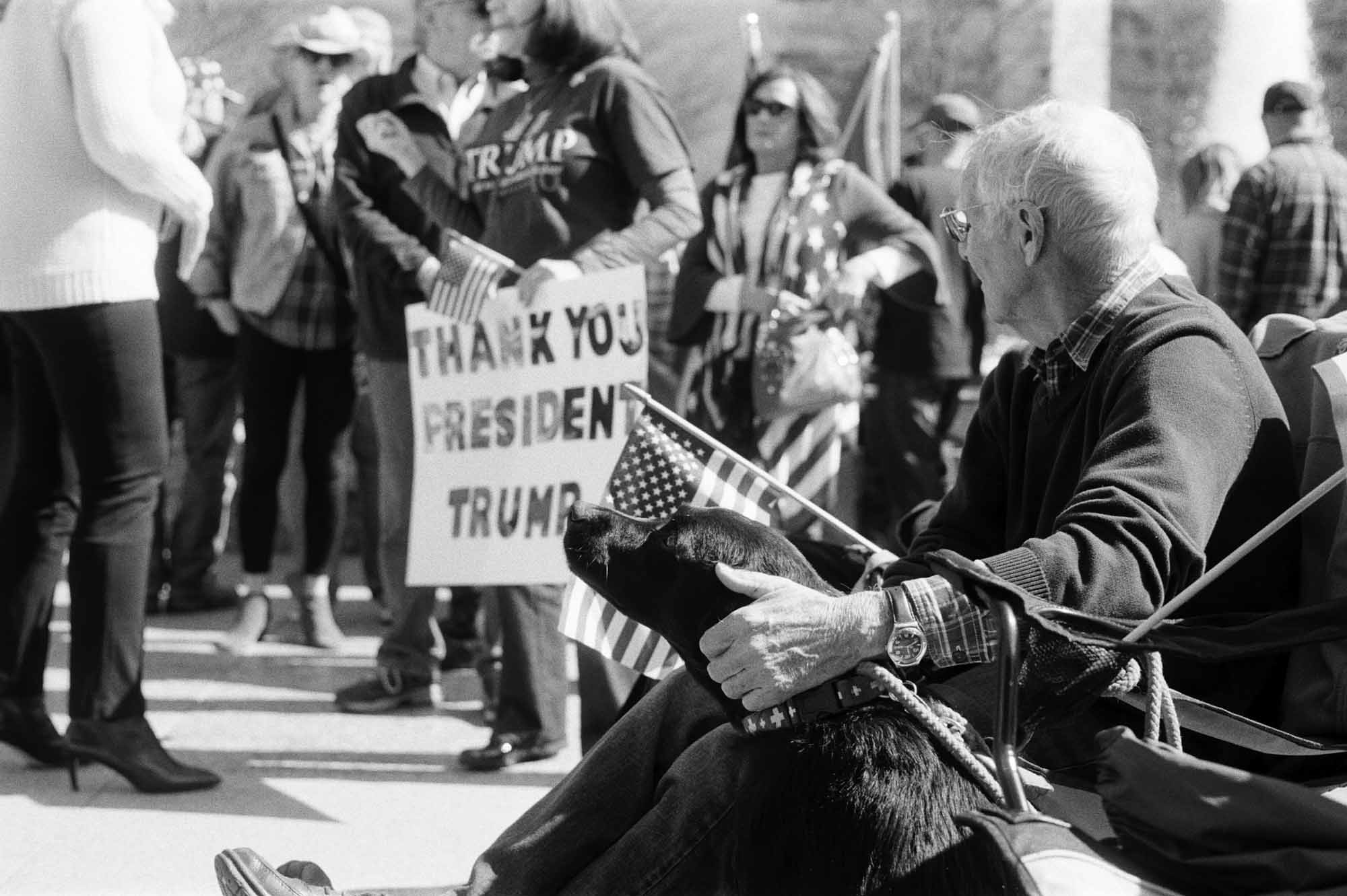 I can’t remember all of the special guests, but there were a host of speakers that took the stage as well as a performance from a local country music artist. There was one person I did remember, Ralph Bristol. That one was easy because I listen to him on the morning commute to work. He’s the host of Nashville Morning News. The first two pictures in this next series of photos are pictures of Ralph at the podium.

The crowd of people gradually increased over time. I worked my way around the plaza grabbing a shot of whatever I found interesting. During this time, there was tension mounting on the East side of the plaza. We’ll get to that shortly, but first, here are some more shots from the plaza. 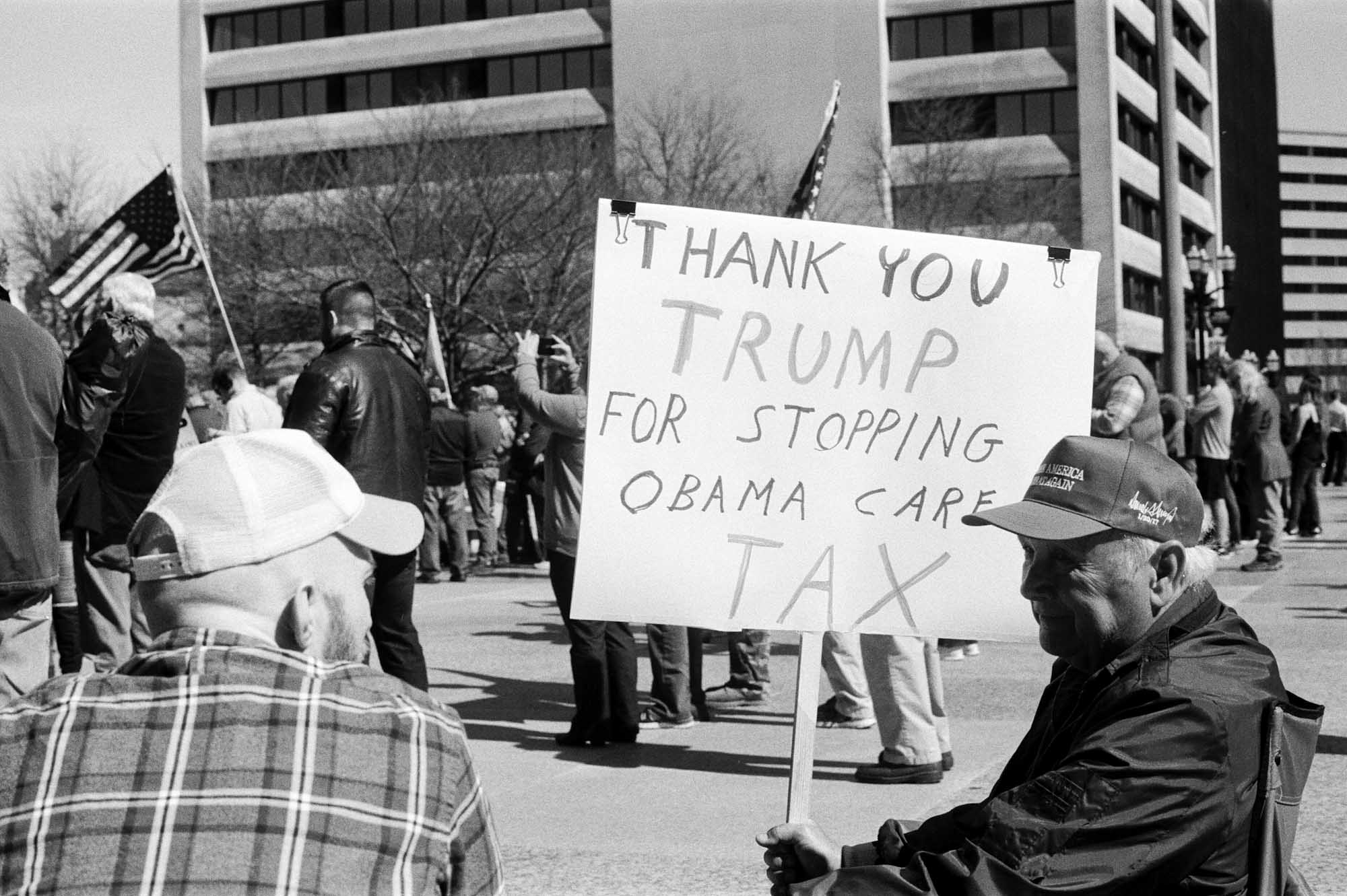 As you might imagine, not everyone came to the Legislative Plaza to support the president. There was a group of protesters on the East side of the plaza making a ruckus. These people did not appear to be your average protesters. They had their faces covered with bandanas and most were dressed in black. They yelled through megaphones and they held flags and banners. Not all of the people within this crowd had their face covered and not all of the people in this crowd were as vocal and animated as the ones on the front line. I’ve learned that these protesters with their faces covered are part of the antifascist fighting club, otherwise known as ANTIFA.

If it was not for the Tennessee State Troopers, I believe these protesters would have gotten closer to the plaza where the Trump supporters were assembled. The troopers formed a wall at the steps that led to the plaza and there were more troopers and other law enforcement located throughout the perimeter.

Things really heated up when some familiar faces showed up. If you have been keeping up with my previous posts from this series, you will recognize these two faces. These two men were not there to represent the Trump supporters nor the protesters. They were there in the name of God. It might appear that they were on the Trump supporters’ side as they were facing the protesters, but I have seen them in action when President Trump came to Nashville. These men and a few more from the same group engage the Trump crowd about God and the Bible. There were some disagreements, but things were more cordial than their encounter with the people participating in the silent inauguration and the protest at the capitol. These two men appear to search out the path of most resistance. The first shot of this next series of images was chosen by the curators of Chromatics’ 2nd Floor Gallery in Nashville, Tennessee to be in their Exhibition called “Captured Emotions.” 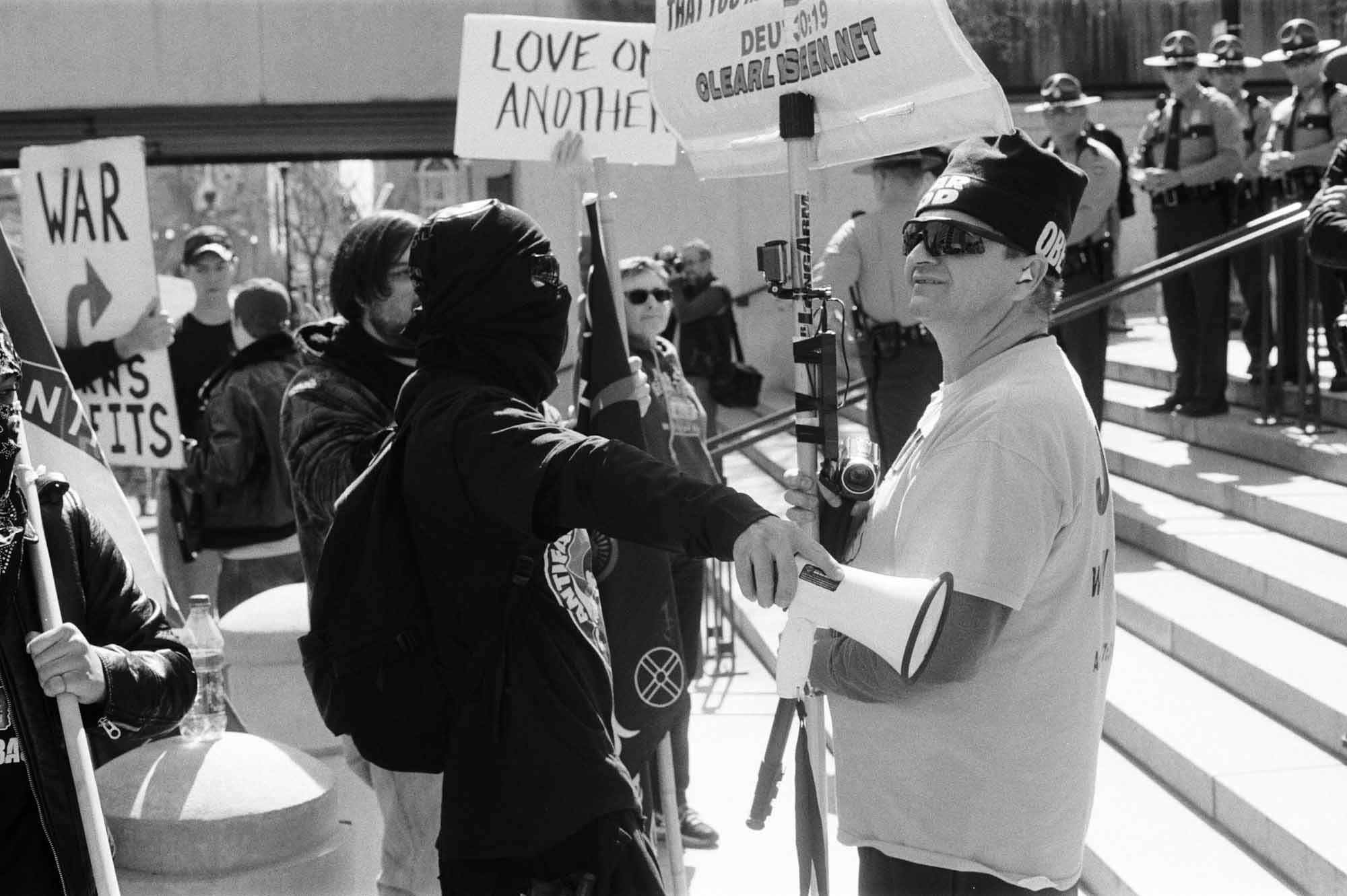 The activity around the steps was pretty exciting. I was waiting for someone to make physical contact, but that never happened while I was there. I believe the State Troopers on watch had a little to do with that. However, I did hear that one of the protesters was arrested later that day. I believe this particular protester set their sights on doing harm to the bikes that were parked in front of the Trump Bus. I think messing with those bikes would be a bad idea. Looking at those bikers (5th photo from top), I would not want to make these guys mad. There was plenty of action around the confrontation area, so I continued capturing what was happening on the front lines.

I also caught some other photographers in action, amateurs and professionals. Here are a few. The first shot is a picture of professional photographer Bill Hobbs. Click on his name to check out his website.

I bet the young man with the camera below has a story to tell. I should have taken the time to engage him about his attendance at the rally and possibly learned some of his story. Whatever the case, I’d be willing to say he’s not the type that makes excuses.

What an exciting day! My camera got a work out as well as my legs. I met some great people and made some new contacts. Regardless of the political party, I love documenting events like this, but I am also glad to walk away from the tension when everything is over. I’m not a fan of confrontation, but I do understand the need to make a stand. We are fortunate that we live in a country where we can make a stand and live to talk about it. That is why I titled this documentary series “American as Apple Pie.” It does not get any more American than free speech!

ANTIFA, the men spreading God’s word and the protesters at the state capitol all have the right to voice their opinion. That is where I find common ground. While I support their right to promote their message, I don’t agree with their methods. I believe there are better ways to get your message across. If you are in someone’s face yelling at them, your message is not heard. Thus, it appears you might be there just to incite. What I witnessed amongst ANTIFA, the protesters at the state capitol and the men holding the Bible did not have anything to do with peace nor an earnest dialogue to sway your opposition.

There is something else that I believe is worth mentioning. It appears that the people who are more apt to chain themselves to the doors of the state capitol or hide their faces behind bandanas are mostly young adults. The overwhelming majority of the ANTIFA group and the people who chained themselves to the state capitol were probably in their twenties. Is there a generational change that’s evolving?

I wanted to end this series with my view on these events. I also wanted to illustrate that I can be objective even though my view of the situation may find favor with one side or the other. I believe it is important for us to have our beliefs, but as journalist we must put those beliefs aside and report what is in front of us. Leave it to the audience to make the interpretation. Thanks for reading!

3 thoughts on “American as Apple Pie – The Spirit of America”